The new Rosalind Sallenger Richardson Center for the Arts on the Wofford College Campus is named for the wife of Wofford alumnus and trustee Jerry Richardson, founder and owner of the Carolina Panthers football team. This facility houses the visual and theater arts and art history departments. The exterior of the building features limestone, brick and copper and large areas of glass.
A 325-seat performance hall with a 2,600-square-foot stage is at the heart of the building. It is outfitted with high-performance theatrical lighting, rigging and audiovisual systems and is supported by dressing rooms, green room, acting and rehearsal studio, costume design shop, and wood shop for scenery construction, which includes an integral dust collection system. A black box theatre provides additional performance space.
The art department makes use of 2D and 3D studios sized to accommodate 20 to 25 students at easels or drawing benches. A ceramics studio has several large work tables and four potter’s wheels with a kiln outside on a covered porch, which also serves as a space for using spray paint and adhesives. Air quality was taken into account in the art rooms, particularly the ceramics studio. All art studios are washed with natural light and feature views to the outdoors.
Seminar and lecture format classrooms, faculty offices, and an open courtyard complete the building.
Artwork is publicly displayed in a museum designed to house Wofford’s permanent art collection, as well as in a student gallery immediately off the main lobby. Humidity, air quality, and temperature in the museum, and art storage space are handled with dedicated units, very tight controls, and attention to off-gassing of materials. Two large, glass sculptures, commissioned by the Richardsons and created by Chihuly Studios, are featured in the space. 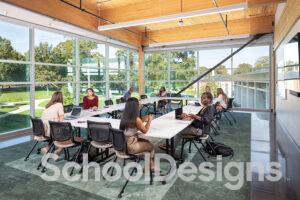 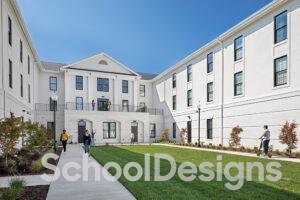 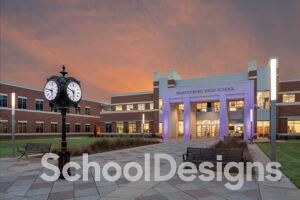 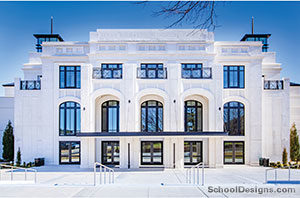