The original Jerome S. Coles Recreation Center for New York University (NYU), including the natatorium, was designed in the late 1970s. After 20 years, the high humidity level in the natatorium had deteriorated the ceiling and other architectural features. NYU initially wanted just a new humidification system, but the scope grew to include air conditioning, lighting upgrades, and replacement of architectural elements and the pool filtration system.
Construction was completed in four months, despite having to scaffold the entire area to remove the ceiling and elements above. Location of the mechanical equipment was a design challenge. Zoning regulations prevented placing it on the roof, so the mechanical equipment room had to be inserted within the existing natatorium space. The design integrated both the mechanical equipment room and the distribution systems with minimal visual impact.
Other design features:
– Custom-designed, indirect lighting that replaced the high-ceiling, recessed lighting for better, easier-to-maintain illumination.
– A new filtration system.
– A new vaulted ceiling, appropriate for present-day aesthetics, made of a stretch ceiling membrane that is virtually maintenance-free. 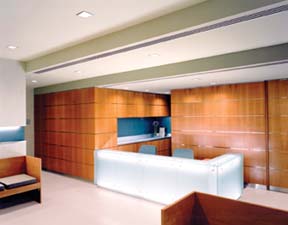 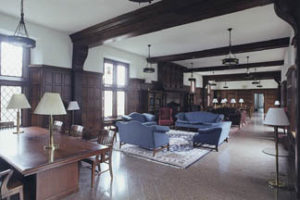 Queens Court Dormitory is an interconnected complex of three buildings at the...