Dallas Baptist University, a century-old Christian institution of higher learning, has been situated on a picturesque hilltop campus known as University Hill in southwest Dallas since 1965. Central to the university’s mission of providing Christ-centered higher education are its chapel services held three days a week. From the chapel service’s early days situated in a tent revival-style, to later years housed in a gymnasium facility on campus, it has been a long-standing vision of the university administration to build a permanent and fitting home for chapel services that are so integral to the education and development of tomorrow’s servant leaders.

The soaring Patty & Bo Pilgrim Chapel provides that long-sought permanent home for chapel services, and stands as a shining focal point among the traditional colonial style red-brick buildings on campus. Seating 1,480 in beautiful pew-backed individual seats, the worship space is designed to accommodate a multitude of campus functions in addition to chapel services. The facility incorporates current technology and state-of-the-art sound, lighting and acoustics, carefully designed to integrate seamlessly into the traditional worship space. A magnificent pipe organ serves as a companion to the technology, greatly enhancing the traditional look and feel of the space. In addition, the four-story facility houses a banquet hall, recital hall, classrooms and offices, executive conference room, and a beautifully appointed bride’s room.

Utilizing design inspiration from historical sources, as many of the surrounding campus buildings do, Pilgrim Chapel serves as a thoroughly modern facility that is crafted carefully to pay homage to an era of stirring and inspired design from our nation’s rich source of architectural history. 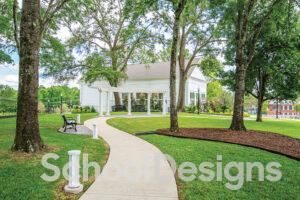 After an initial gift from Gene and Patsy Ponder of Marshall, East... 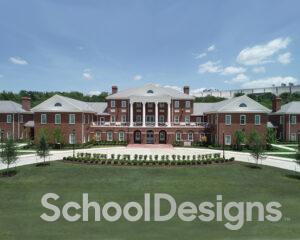 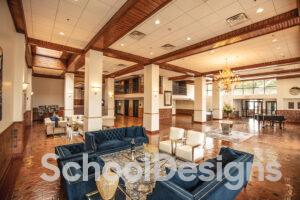