Executive Vice Presidents Al Krueger and Glenn Roby have been promoted to the roles of CEOs of the Kahler Slater design firm. This move fulfills strategic succession plans that began several years ago. 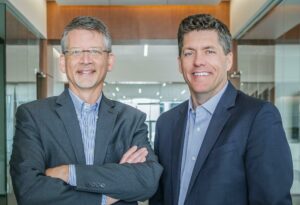 Krueger and Roby succeed George Meyer and Jim Rasche, who have been with Kahler Slater for more than 35 years each and are transitioning to new roles as Chief Executive Officers Emeritus.

Krueger and Roby are both architects with more than 20 years of experience.

Krueger leads the Kahler Slater Healthcare Team. Under his leadership, Kahler Slater has added many new client relationships and projects. Krueger has built upon the firm’s Mid-Atlantic presence with the launch of the firm’s office in Richmond, Va., in 2017.

Roby leads the Kahler Slater Corporate, Hospitality and Residential Team. Under Roby’s leadership, the team has more than tripled in size and has added new capabilities. Roby also played a leading role in opening Kahler Slater’s Chicago office in 2020.

Kahler Slater’s leadership team, led by the new CEOs, is responsible for carrying out the firm’s new five-year strategic plan, which will focus on significant growth for the firm.