This new development incorporates the best features of the main campus: clear organization, axial relationships, view corridors, and a hierarchy of open space ranging from communal gathering spots to quiet interior courtyards. Buildings relate to one another along connecting axes extending from entries to towers, and volumes are varied, generally rising up toward the center and stepping down at the ends.
Students will find an extension of the University of Colorado style within buildings designed to promote a sense of ownership. Apartment-style units are arranged along short corridors, and the building width is kept narrow so that each unit has plenty of windows for sunlight and fresh air. Common lounge, study and service areas are situated near entries and at interior corners, facilitating social interaction among residents.
The project was awarded in January 2002, and construction began in June of the same year. Working within an unusually tight timeframe, the development was able to meet the project’s goal of opening in August 2003. 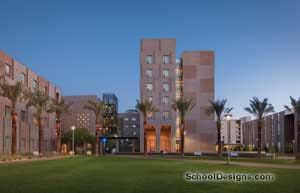 Organized in a network of interconnected courtyards, Barrett Honors College is a... 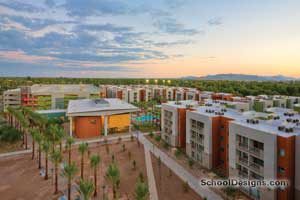 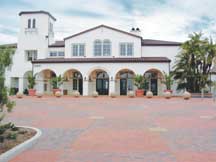 The target market of this project is undergraduate and unmarried graduate students...